As more people become aware of the advantages of using organic and natural sweeteners, there has been a considerable increase in demand for maple syrup and maple sugar globally.

The xylem sap of sugar, black, or red maple trees is used to make maple syrup. However, syrup can also be produced from other maple species.

Maple syrup, which has been made since before Europeans came to North America, is the most popular natural sweetener.

Native people from the northeastern part of North America were the first people who made organic maple syrup and maple sugar.

The custom was adopted by European settlers, who also invented new industrial techniques. Most maple syrup is made in the northeastern part of North America.

It is also made in the southeast parts of Quebec and Ontario, Canada. It can be made anywhere where maple trees grow, as long as the right weather conditions are there.

Before the winter in cold climates, trees store starch in their trunks and roots. The starch is converted to sugar, which rises in the spring sap. Maple syrup has a similar calorie count to sugar.

However, 22% of the FDA’s is present in 13 grams of maple syrup, or slightly less than a tablespoon. 3.7% of the recommended daily intake of zinc is found in the same volume of syrup.

In comparison to honey, maple syrup provides 15 times more calcium and a tenth of the salt.

Scientists are looking through the natural phenols in maple syrup for antioxidant chemicals that might help with type 2 diabetes.

34 novel compounds have been discovered, five of which have never been seen previously in nature. One of those unique compounds is Quebecol, a phenolic molecule produced when maple sap is boiled and reduced to make syrup. 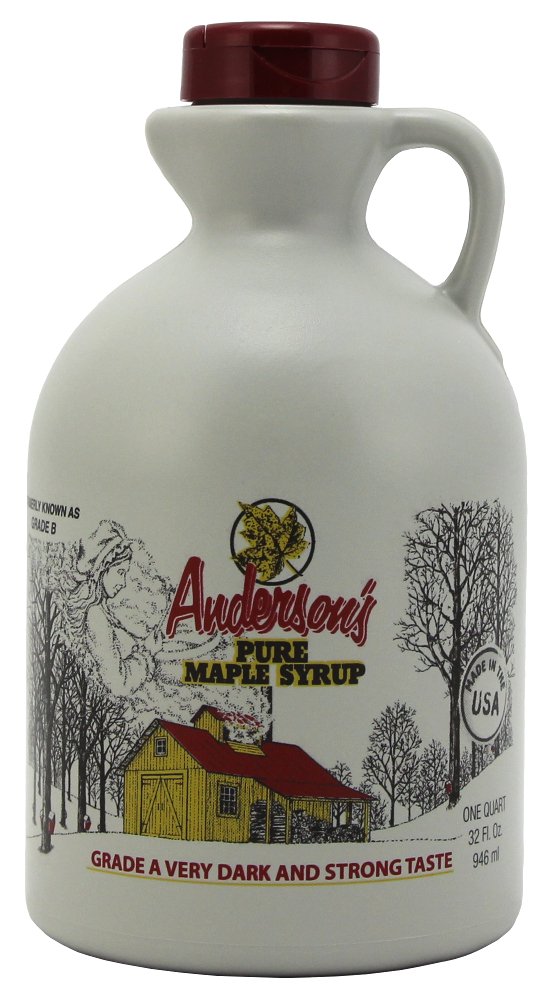 Since 1928, the Anderson family has been making pure dark amber maple syrup, which shows their skill and dedication.

Wisconsin maple syrup is the best option for all uses due to its perfectly balanced flavour that is neither too sweet nor too strong.

It may be used as a topping for pancakes or oatmeal or as a sweetener for yoghurt or savoury foods. With no additions or preservatives, Anderson’s Pure Maple Syrup is entirely natural.

Although some pure maple syrup could be an investment, Anderson syrup is cheaply priced. However, a reviewer still referred to it as “a luxury that is worth having.” 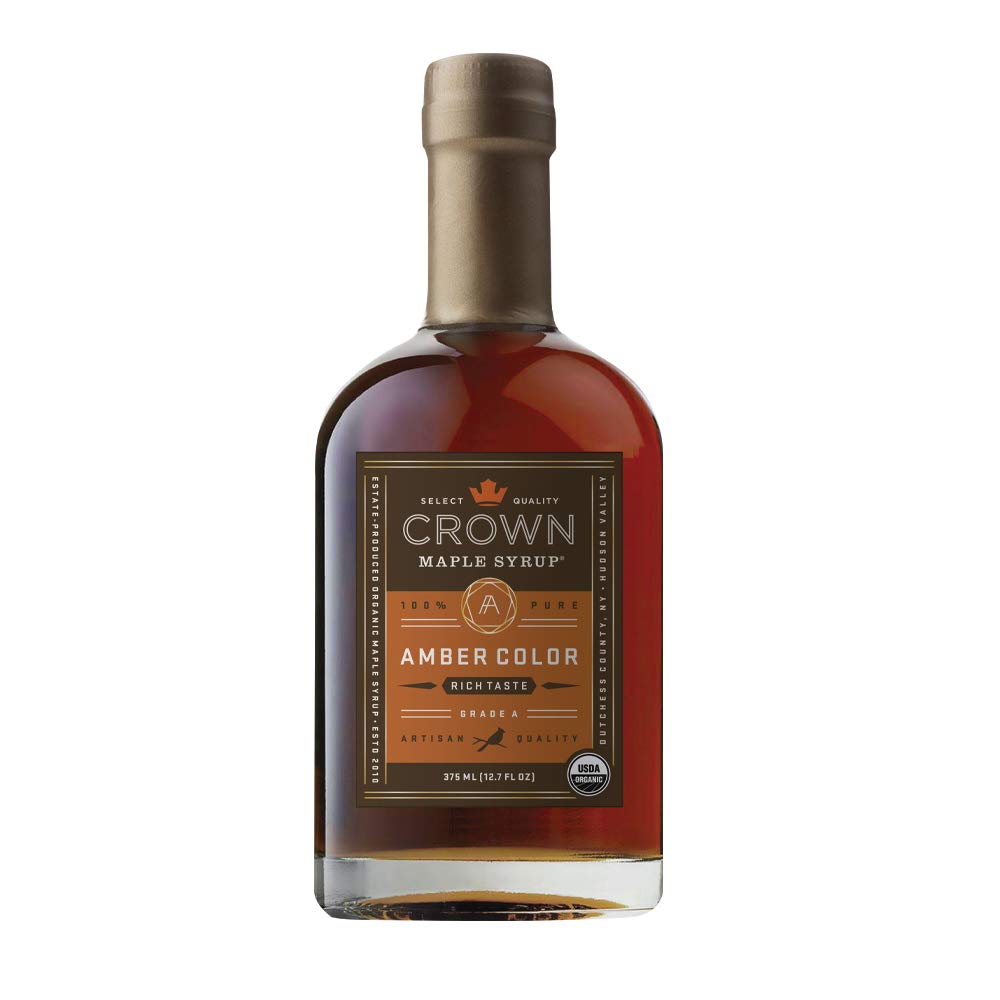 In 2010, Crown Maple lifted the bar and everybody’s expectations for maple syrup. The 800-acre maple farm is in New York’s beautiful Hudson Valley.

The company mixes effective, cutting-edge technology with time-honored, artisanal craftsmanship. With a more complex flavour, this syrup rises to the top of the list.

The Golden Color exhibits bright, floral, and lemony aromas, while the Very Dark Color rich Taste has a dark and woodsy flavour.

If you want to buy this premium product, be careful to treat it properly by simply lightly warming it when consuming it and refrigerating it after your meal is finished. 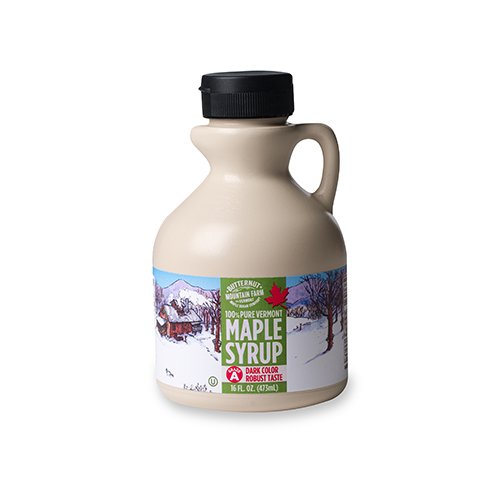 Add this treasure to your menu for a traditional, stick-to-your-ribs kind of breakfast. Try any of the mouthwatering infused syrups, such as the Sweet Chai Infused or the Sweet Heat Infused Maple Syrup.

Just take a look at that bright colour; it’s so transparent that it looks like ambrosia and is far too lovely to consume. But don’t even think about passing up the maple syrup from Butternut Mountain Farm; it’s among the best you’ll ever taste.

One of the country’s biggest producers and sellers of maple products is Butternut Mountain Farm in Morrisville, Vermont. More than 80 hardworking people make up their strong team.

They carefully protect their valuable goods, from local trees to food ingredient producers, distributors, merchants, and customers all over the world. 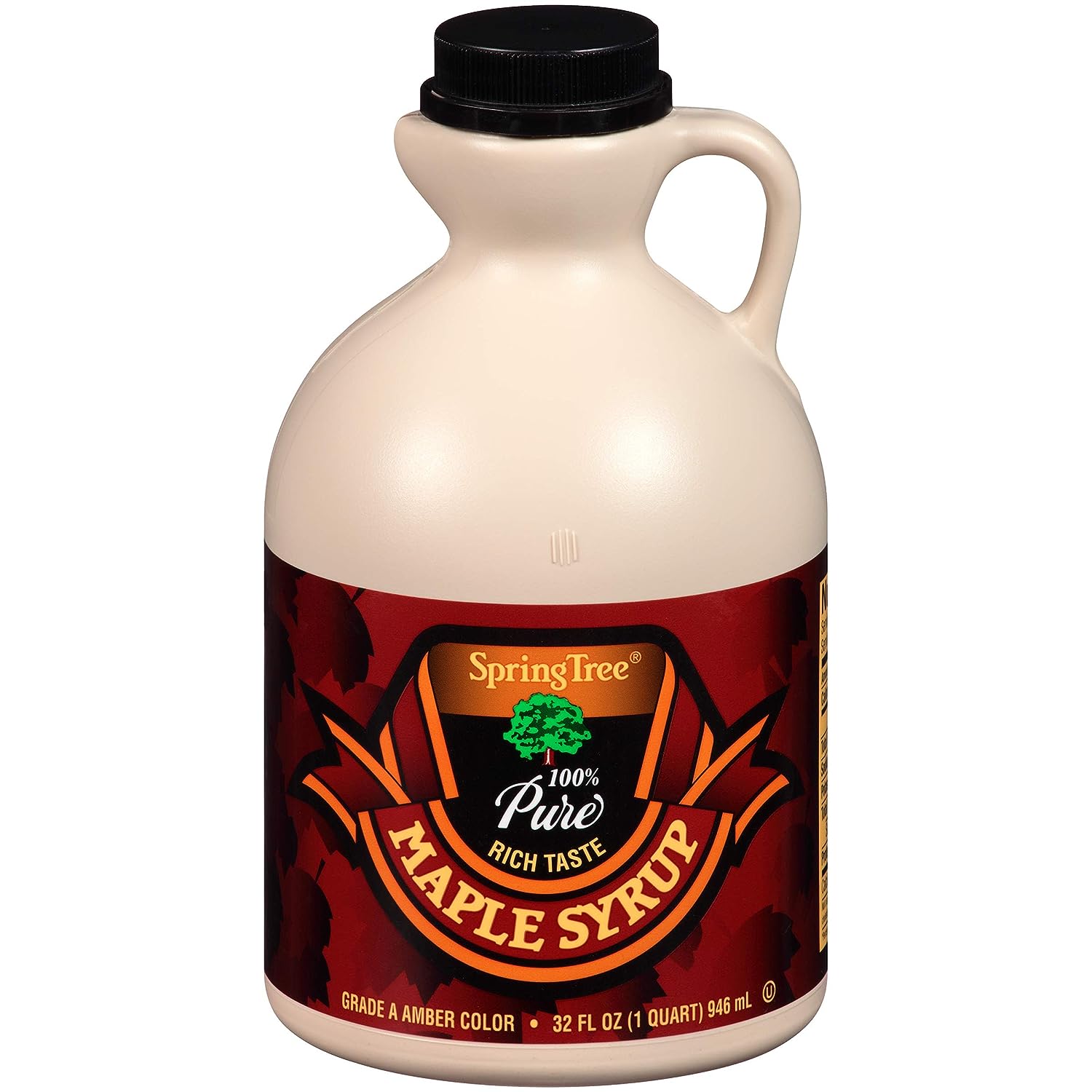 Inspiring company Spring Tree was established in Brattleboro, Vermont, in 1976. The brand gave the trees themselves as the names of its products.

It makes a great allusion to the age-old custom of tapping trees and making pure maple syrup out of the sap once springtime’s warmer, sunnier days arrive.

Although Spring Tree now provides both pure maple syrup and sugar-free pancake syrup, if at all possible, stick to the former for all of your syrup needs, as there is no alternative to the real thing (or wants).

This one has a unique touch thanks to hints of brown sugar. In addition to tasting fantastic when poured into every crevice of a thick Belgian waffle, it also looks fantastic when set out on your counter in between meals. 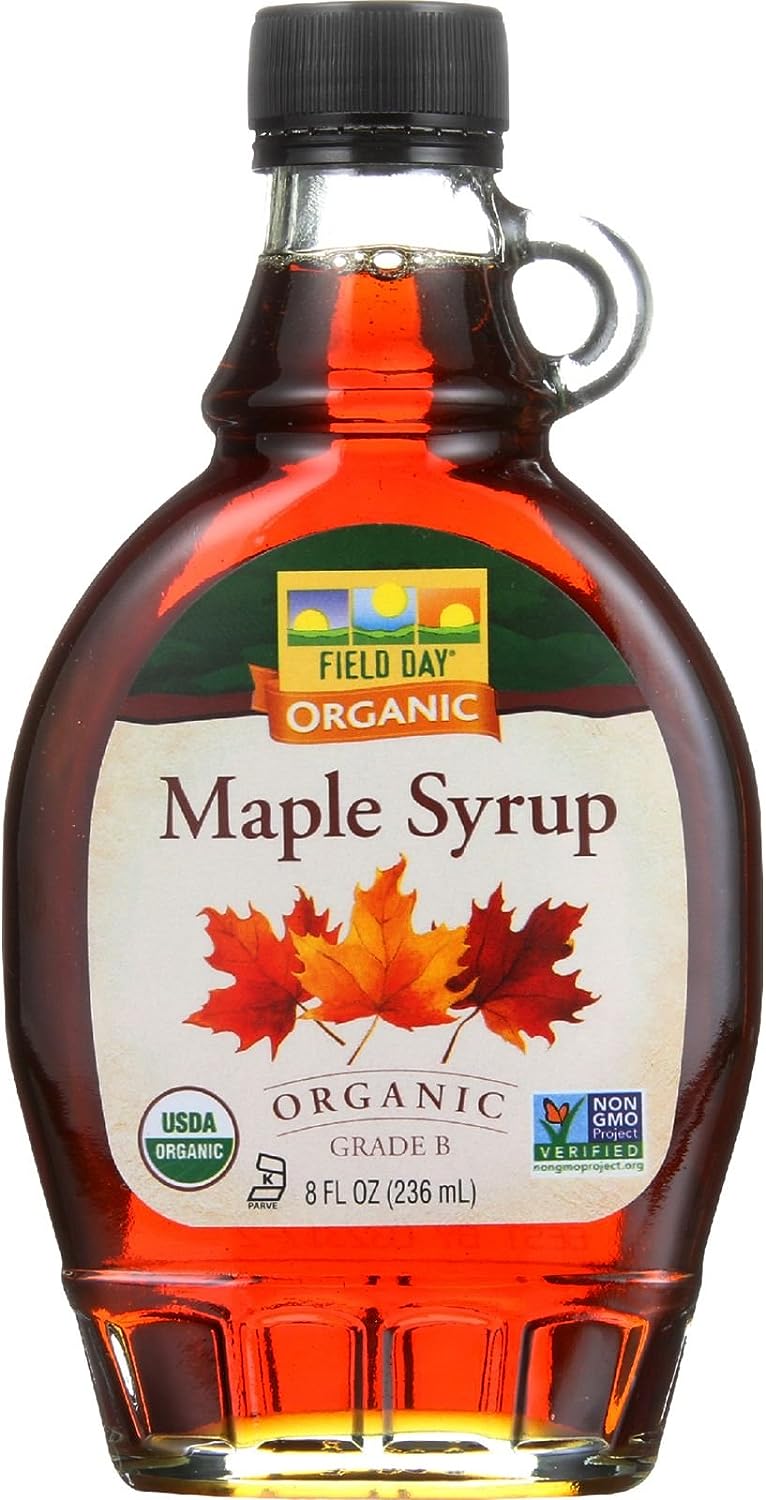 Early riser? Organic Maple Syrup can quickly transform you into an early riser! The company sources organic, non-GMO goods that are pure in flavour and have straightforward components.

“Less is more” definitely comes through and gives you confidence in what you’re eating with the “aim to fill your house with a wide range of value-priced things that you can use and feel good about every day.”

The only flavour you’ll notice is the rich maple flavour, which is one of the best flavours one can find. Since there are no artificial colours, flavours, or preservatives, this is obviously the case.

Field Day is a candidate for daily use even though it isn’t the greatest bottle available on the market.

Other maple species’ sap typically contains less sugar, so twice as much of it is required to make the same amount of finished syrup.

Both granulated and powdered maple sugar are available from Mohawk Valley Trading Company.

This company knows its own products well, from Southern Biscuit Mix to Beef and Grits Spice Mix.

At first glance, Southern City Flavors doesn’t appear to be a go-to supplier for things like true maple syrup, a product that evokes images of a wintry Vermont provincial village.

Especially if the product has a chic, minimalist label and comes in a large, imposing bottle filled with mahogany syrup. In those mornings, maple syrup was more prevalent, sure.

This syrup is thick and black, molasses-flavored, and oozing with richness. Whether you’re from the South or not, it’s worth trying at least once in your life, even if it’s not your cup of sweet tea.

The Merle family came to America from Germany in 1844, and in 1923 they bought a farm in the Attica township that was perched on a hill.

After the Great Depression, when that land was lost, the family purchased a new farm in the valley. In 1958, Merle Maple switched from using tubing to hanging buckets from trees.

Since then, the company has expanded from its 1,200 buckets on trees to its current total of 19,000 taps on tubes. About 9,000 gallons of maple syrup are typically produced annually.

Beginning in March 2007 with a few taps and boiling over an open fire, it has grown through the years into something far bigger than they could have ever anticipated.

Shaw’s still uses a wood-fired evaporator to boil their syrup because they think it gives the syrup the best, most authentic flavor.

In addition to their regular maple syrup, they make their own “maple bourbon barrel aged syrup” and “cinnamon aged syrup.”

Wegmans is a gorgeous grocery store with an equally gorgeous assortment of its own name-brand alternatives that constantly challenge the rest, making it one of the more reasonably priced options.

According to Business Insider, Wegmans consistently ranks first among American consumers’ preferred supermarkets, demonstrating the depth of the affection.

Wegmans Pure Maple Syrup has a nice taste that reminds you of a farm stand, but it won’t take over the rest of your meal. If you’re hoping to find that thick, rich, restaurant-style syrup, search elsewhere because this has a somewhat more watery texture than the others.

However, some pure kinds still have a more robust texture than others. Real maple syrup typically pours much thinner than table syrup.

But if all you want is something better than the corn syrup-heavy breakfast you’ve been having lately, Wegman’s will confidently fill the void.

“Fearless flyers” are loyal customers of Trader Joe’s, a national chain of neighborhood grocery stores, who can’t wait for new products and news to come out.

There isn’t much at Trader Joe’s that you won’t like, unless they decide to stop selling your favourite item or switch to the new seasonal things while you’re still using the calendar year.

Fortunately, this syrup and other items with a maple scent are accessible all year long, such as the decadent Maple Leaf Cookies or renowned Pancake Bread.

It can be easy to forget that Trader Joe’s also frequently has superior versions of traditional staples because there are always a ton of fascinating new products in different flavors.

With pumpkin pancakes, chicken and waffles, or stuffed brioche French toast, you can get as fancy as you like, but without great real maple syrup, the experience’s potential for deliciousness is limited.

Also a great touch are the adorable miniature mahogany falling leaves on the golden yellow label. The grade-A rated, vivid amber colour and genuine maple flavour of Trader Joe’s 100% pure maple syrup are just as amicable and welcoming as the store itself.

The best maple syrup brand may make a world of difference whenever you want to enjoy your patio or backyard without baking in the sun. We really hope that our detailed analyses and side-by-side comparisons, which were backed up by measurements, helped you choose the right color for your space. 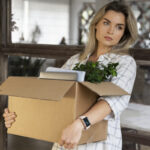