How to adjust a rifle scope?

It is mandatory for you to understand how a riflescope can be adjusted before actually using it. It requires a lot of prior detailed knowledge, before putting it to practice. Different weather conditions require different adjustment e.g. distance and magnifications. Even if you are an experienced shooter, there are many factors that go unnoticed and can play a role in making your shooting encounter more accurate.

There are certain riflescope parts that are important to know about before getting on to adjustments. Here are the ones that are vital:

Ocular lens are the closest to the eyes while looking for the target, and should be protected by the scope caps. The ocular lens and focus adjustments are placed inside the housing for added protections. Focus adjustments allow focusing the image of the reticle inside the scope to the eyes, and the magnification power of the scope adjusts the mechanism itself. There are two types of housing adjustments, in one the whole piece turns, whereas in the other only the outer part turns for adjustments.

It is the main body where all the other parts are joined, and it is the tube through with the target is aimed. It has turrets, also known as knobs used to adjust elevation and winds, along with a reticle that helps in the aiming process and long range shootings.

Target focus brings the image of the target in the same focal plane as the reticle. This brings the target image to focus and voids any parallels errors. The objective lens is the larger one out of the two, and is always facing the target. It should be protected by a scope cap as well, as it damages quickly.

How to make magnification adjustments?

There are two magnification adjustments available in a riflescope. The first one is the first focal plane (FFP), in which the entire ocular housing is rotated to keep the magnification on track. The target image is adjusted with the reticle, which means any graduated settings can be used. However, it might be expensive and the reticle might be either thick or thin to an extreme level. It works best for long distances.

In second focal planes, the reticle image stays the same but the target image is adjusted. There might be an issue with the graduated marks, as the reticle does not change. In case of getting smaller, only the image does, causing the marks to be mismanaged e.g. the power might be half and the marks might be twice.  A lowered magnification gives a better target approach.

How to change parallax adjustments?

Parallax error is when the alignment of the reticle and the head causes you to miss your target. After being misaligned, the rifle is shifted to bring them together, however the shift causes a change in the orientation of the barrel, and hence the bullet path is altered. It is easy to fix this. The eye is supposed to be focused on the reticle, and the target focus should be adjusted so that the focal point of the image is in line with the target. This reduces the parallax error and the target focus is adjusted.

How is elevation adjustments made on a riflescope?

The elevation adjustment is made when the impact of bullet up and down is altered in accordance to where you are aiming from. This trick is usually used when the scope is being zeroed or when you are shooting from a distance. When the point of aim and the point of impact is the same, the bullet strikes the target at a baseline target. This is called zeroing. If the zeroed scope distance is different than the shooting distance, the bullet will travel in an arc and miss the target. If the impact had to be moved upwards, the elevation should be turned to up and vice versa. Usually, the turret has to be moved anti clockwise for upwards motion and anti-clockwise for downward bullet motion.

How to change windage adjustments?

The windage turrets are used to alter the bullet impact to left or right when the scope is zeroed to a rifle. This trick is used when the wind is mild or very strong and in normal circumstances the bullet might be strayed on a different path. However, the only problem is that it has to be frequently changed, and it becomes difficult to bring it back to zero.

How to focus the scopes eye piece?

Once the scope has been properly mounting, you need to get in a comfortable behind it in such a way that the scope should be seen clearly. Look at the reticle and then close your eyes as this might change the focus and make it seem to be closer. The ocular focus adjustment is to be half revolved in one direction, and is to be placed on spot with a locking ring. After this close your eyes for another 3 seconds, and then open them and look at the reticle. Figure out if the reticle looks better or worse. Repeat this process several times until you find the perfect spot where the reticle looks the best.

How to move the scope in accordance with the rifle and shooting?

The height of the scope needs to be kept in check as mostly it has to be increased. It can be figured out if you have to constantly strain your neck to reach the shooting scope. This problem can be solved by using height scope rings or cheek piece stock pack. After adjusting the scope to the right height, the forward and backward option is considered. If you are too far away a scope shadow appears, and if you are too close you might hurt your eyebrow. After this, the riflescope should be leveled in accordance to the right shooting range.

All of the altering and fixing makes your shooting process easy and flawless. You can shoot your target easily, without all the factors get in the way. Hopefully, this article was helpful in learning about your riflescope. Just remember that practice makes everything perfect! 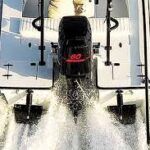 How to adjust the trim tab on an outboard motor? 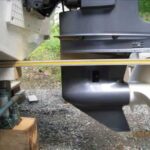